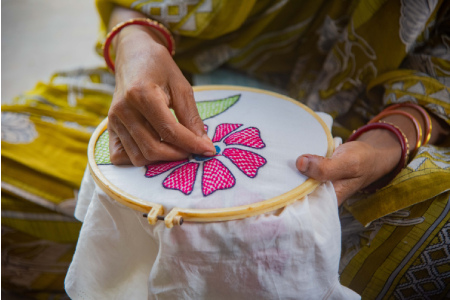 Kantha was a personal expression, an art-craft that was made spontaneously, even whimsically. It was never commissioned by rulers, nor ordered by the landed gentry. It was a craft that was practised by women of all rural classes. It has been passed on for generations, from mothers to daughters and is largely a “dowry” tradition.

The Kantha tradition was widespread in undivided Bengal, cutting across social, economic and religious norms and the technique, process and aesthetics of this ‘utilitarian’ textile have ancient roots. The visionary, thinker, philosopher and poet Tagore who wrote movingly about Lord Buddha’s renunciation in his poem Ebar Phirao More, refers to the young prince Shiddhartha as one with only a Chinna Kantha (tattered Kantha) leaving his kingly home in search of his ultimate truth shorn of all his princely garments and material possessions. Among the Muslims too, Sufi saints and the dervishes including the Baul singer Lalon Fakir- so revered in undivided Bengal- were known to use layered and quilted Kanthas as attire. The Baul singers refer to Kanthas in their mystical music as a metaphor for their spiritual wanderings free from material ties. In one of his Baul Gaan or songs Lalon Fakir says, “Lalon sainer chera kantha gaye dile ki sit mane” Can Lalon’s tattered Kantha keep this cold away? Replete with such spiritual undertones the Kantha was naturally seen as a symbol of an ascetic’s surrender of material ties. Other early references in folk songs and verses indicate that the Kanthas reworking of old fabrics into a new object was viewed as a symbolic enactment of the cycle of life and its affirmation of rebirth and revival.