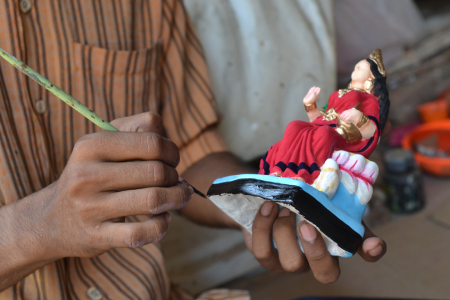 The clay dolls of Ghurni are famous and known to all for their beautiful, lively structures and vibrant colours. Like everything else in Krishnanagar, the clay dolls too are associated with Maharaja Krishna Chandra. According to local belief, while fleeing from Mir Kasim’s custody, the Maharaja on his escape route through the river was instructed to pay homage to a local deity in his dreams. To build the idol of the goddess, he brought the doll makers from Natore, now in Bangladesh and settled them in Ghurni of Krishnanagar. The story, however, does not find any historical evidence, though there is no denying the fact that the crafts persons of this area historically made idols of gods and goddesses.