The district of Uttar Dinajpur came into being after the bifurcation of West Dinajpur district in 1992. Raiganj, a city and municipality on the bank of the Kulik River, is the district headquarter. Raiganj Wildlife Sanctuary, the second largest bird sanctuary in Asia, is the primary attraction of the area.

Under the RCCH initiative, this district is a hub of Bamboo, Dhokra & Pottery crafts and the folk drama form of Khon. The district houses 63 Bamboo craftspersons (Basketry), 757 Dhokra weavers, 171 pottery craftspersons and 29 Khon artists.

The art of making clay products.

Bamboo works and Basketry are among the most ancient crafts of India.

The weaving of Dhokra mats on back strap looms is a tradition in Uttar and Dakshin Dinajpur districts. 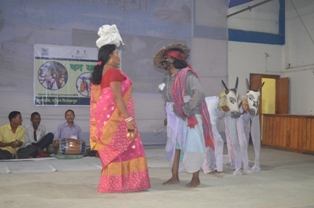